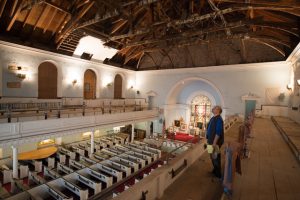 A GoFundMe Charity Campaign has been launched to fund next steps to restore Bloomfield’s historic sanctuary. These include replacing the aging roof, installing a new light-weight interior ceiling, insulating the interior, and rehanging the original chandeliers. This will ready the space for frequent, year-round use while also reducing our carbon footprint and lowering our energy costs. We would love your support to help us reach our goal of $100,000.  Click here for details and to donate: https://bit.ly/2OvD4sC.

The stone-and-wood sanctuary at the north end of the Green in Bloomfield is one of three buildings on our campus that are included in the Historic American Buildings Survey of the Library of Congress. (The other two are our Parish House and the manse.) Photographs and measured drawings of the structure as it existed in 1933 are kept at the Library of Congress and high-resolution images of the photographs and drawings are available on its website . 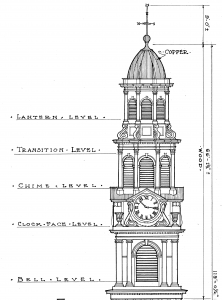 The steeple was constructed in 1896 and replaced the original, smaller steeple, which was completed in 1819. It rises to a height of 119 feet, exclusive of the weather vane at the peak. The steeple houses the Westminster chimes, which sound every quarter hour, and a large bell that sounds the hours. 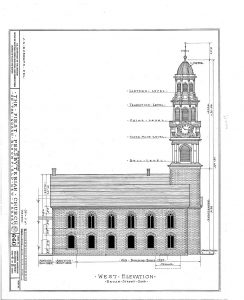 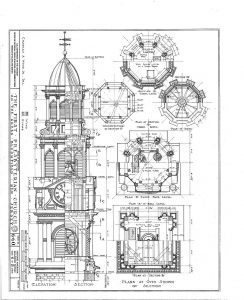 Images obtained from the Historic American Buildings Survey (Library of Congress) Repository Library of Congress Prints and Photographs Division Washington, D.C. 20540 USA. No known restrictions on images made by the U.S. Government.

Mark Alan Hewitt, one of America’s foremost scholar-architects, considers the Church on the Green to be “one of the most beautiful churches on the Eastern Seaboard.” Hewitt writes,

Among the churches built by early Presbyterian congregations in America, the “Church on the Green” in Bloomfield, NJ, stands out for its urbanistic significance and its architectural integrity. Few American churches have stood so long in their original city contexts, while preserving most of their important architectural features, as the world changed around them. The church remains today the single most identifiable symbol of the Township of Bloomfield.

The church was constructed between 1797 and 1819 to the designs of Samuel Lawrence Ward (a member of the congregation), with Joshua James as superintendent of construction. In 1853 a 15-foot extension was added to accommodate a chancel, and in 1883 a Sunday school wing was built on the north side of the church. Both the 1819 and 1853 portions remain essentially unchanged today.

Like “Old First” Presbyterian in Newark, the Bloomfield church is constructed of local Belleville brownstone (sandstone) and conforms to the popular Wren-Gibbs model used in most early American churches. Its nave is an impressive 100-foot by 56-foot rectangle topped by a wood-truss gable roof. Like its English precedents, the interior is two-story, with a U-shaped balcony ringing the nave.

Though its proportions are handsome and fine details abound, the outstanding feature of the building is its commanding bell tower. Almost 120 feet tall, the tower can be seen for miles around, marking the center of historic Bloomfield and its distinctive “green,” a characteristic element in many Puritan towns in New England and elsewhere. Rising in six tiers, the structure rests on a sturdy stone base for half its height, and is topped by a beautiful domed cupola constructed to house bells in 1898. The classical design of the wooden upper stages is a tribute to the English architect Sir Christopher Wren, who developed the tiered form in the 17th century. A historic clock is still in operation in the middle of the fourth tier.

Turn-of-the-century stained glass windows in the sanctuary are fabricated primarily of American Opalescent glass, with some American Cathedral glass, layered in the technique called “plating” pioneered by American glass artist John LaFarge in the mid-1800s and popularized by Louis Comfort Tiffany.  Church records indicate that one of these windows, “The Walk to Emmaus,” is a LaFarge original.  Other windows were fabricated using handmade, mouth blown antique glass and painted in the traditional Trace and Matte technique.  These include both pictorial windows and ornately patterned non-pictorial Grisaille windows. 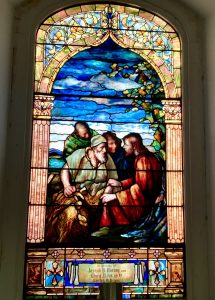 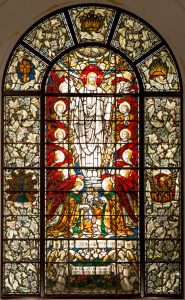 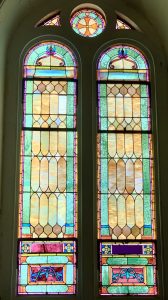 Watch and listen to our Westminster chimes in action:

Watch the mechanism that powers the Westminster chimes: